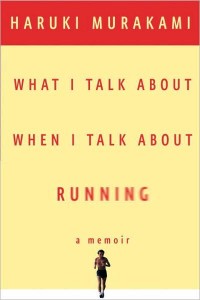 (via The New York Times) In the style of Albert Camus — who claimed that much of what he knew about morality and duty he learned from soccer — Murakami believes that “most of what I know about writing I’ve learned through running every day.” Specifically, he believes that writing requires, in order of priority, talent, focus and endurance — all of which find their complements in the habit of running.

Murakami’s latest book is really not that great but I forgive him since I am such a big fan… but his choice of music for running? oh lord“It’s not bad, but it’s sort of ordinary and doesn’t amount to much.” Blah.