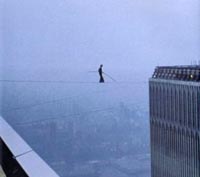 […] Petit was a teenager in Paris browsing magazines in a dentist’s office when he saw a rendering of the then-unbuilt World Trade Center. He was electrified. He was already an obsessed magician, juggler, and high wire artist. To an aspiring tightrope walker, the idea of two 110-story towers, side by side, suggested only one thing. Petit drew a line between the image of the two towers. All that remained now was the execution.

Making the walk happen took years of planning. Petit sums up his own attitude with characteristic aplomb: “It’s impossible, that’s for sure. So let’s start working.” He moved to New York and began visiting the construction site, at one point obtaining access to the top of the towers by posing as a French journalist. He made drawings and took photographs. Returning home, he built a full sized model of the WTC roofs in the French countryside to practice the walk. Getting all the necessary equipment up to the tops of the towers was not a one-man job. He recruited a group of confederates, a colorful multinational troupe who offer conflicting present-day memories throughout the film, and who each played a different role in what they privately called the coup. The plan was not just bold but actually rather insane: their solution for the hardest part of the whole scheme, for instance, getting the wire from one tower to the other, a span of nearly 200 feet, was to use a bow and arrow. It worked. Amazingly, it all worked.

Love Philippe Petit! He would fit right in in a startup!