On Wednesday I attended Toronto’s first edition of Stone Soup organized by my good friends Stuart Candy and Ceda Verbakel. It was a combination dinner party and storytelling. When the invitation landed in my inbox mentioning sharing a story, food in the form of a potluck and the company of 15 hand picked friends and strangers I rsvped with a hell yes!

For those unfamiliar with the Stone Soup story, the story goes like this: a traveler arrives in a village with nothing more than an empty cooking pot. Upon her arrival, she asks for assistance from the villagers for dinner and shelter for the night. The villagers are unwilling to part with any food or provide assistance as times are hard. The traveler having a cooking pot goes to a stream and fills it with water and puts it above a fire. She then drops a large stone in the cooking pot. A first villager walks by and asks her what she is doing to which she responds “making stone soup” which tastes wonderful however it needs a bit of additional flavouring which she is missing. The villager does not mind parting with a few carrots to help out. So that gets added to the soup. Another villager walks by, inquiring about the pot as well, and the traveler mentions that the stone soup in the making still needs more garnishes to reach its full potential. This villager hands her a bit of seasoning to add to the soup. And slowly as villagers walk by and inquire as to what’s cooking and each part with a little something that can be added to the soup, the village ends up with a stone soup that is delicious and feeds everyone.

The Stone Soup version I am familiar with is la soupe au caillou by Father Phillipe Barbe (1771). I always loved the original ending. 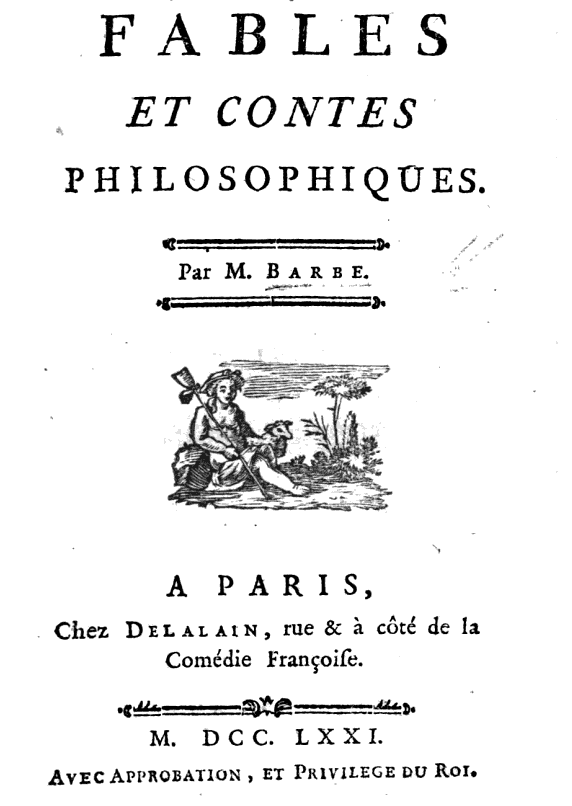 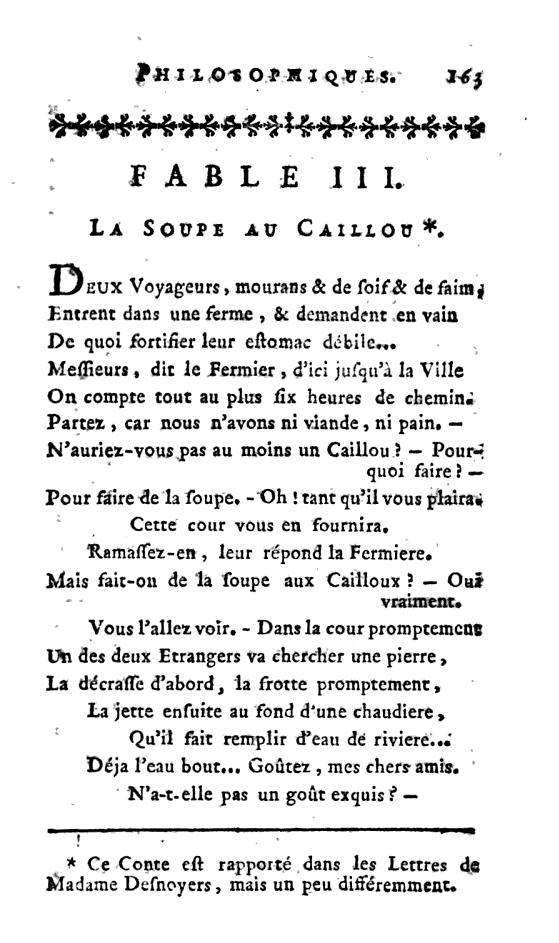 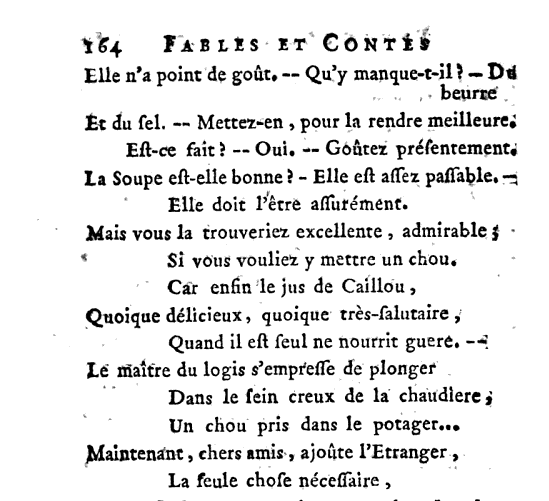 Growing up I was a big fan of fables. Bonjour Jean de La Fontaine! Anyone remember La cigale et la fourmi? The entire collection of Barbe contes et fables philosophiques is accessible online and it is a wonderful read (albeit you will need to speak French!).

I am sure there are many many variations of the Stone Soup story and a version to suit pretty much any country or culture. It is such an adaptable story with a beautiful ending.

Last night’s first edition of Stone Soup in Toronto was in theory a pretty simple event: get a few people together for dinner, ask everyone to bring a dish since dinner was potluck style and pick a theme for the evening. Yesterday’s theme was “first”.

The evening started in the garden with drinks and nibbles. It was a wonderful evening under the Toronto spring skies. 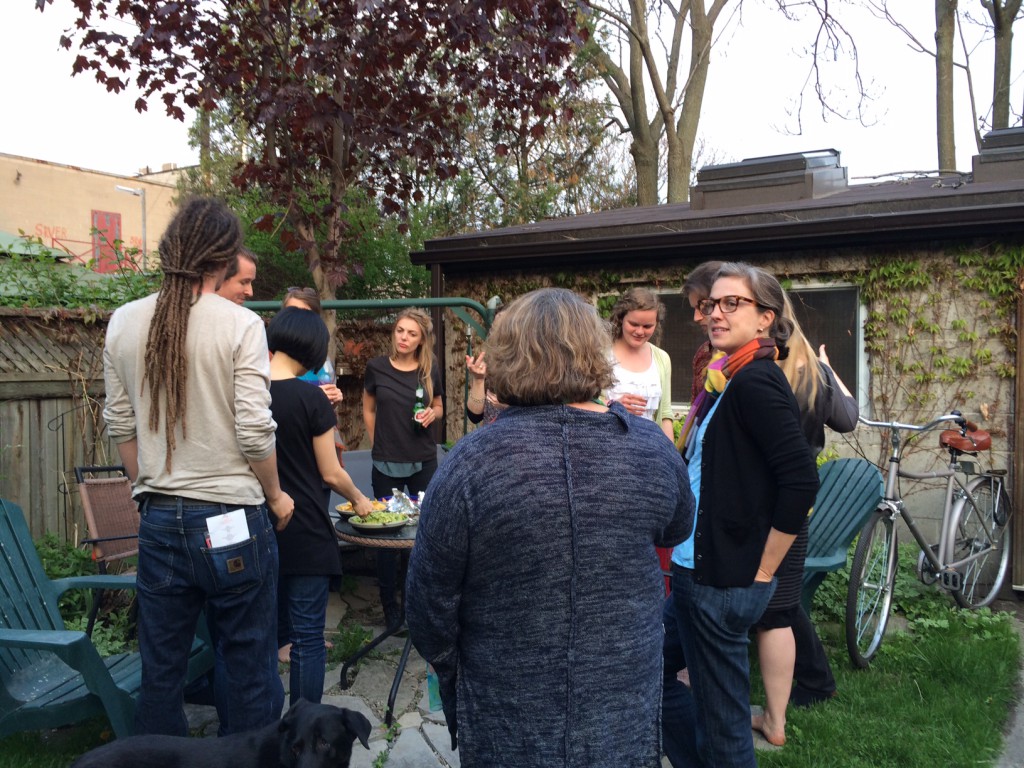 At some point in time, Stuart ask everyone to proceed to the living room, much to my dismay, I mean it is spring in Toronto, why would anyone spend time indoors when they can be outside? 🙂 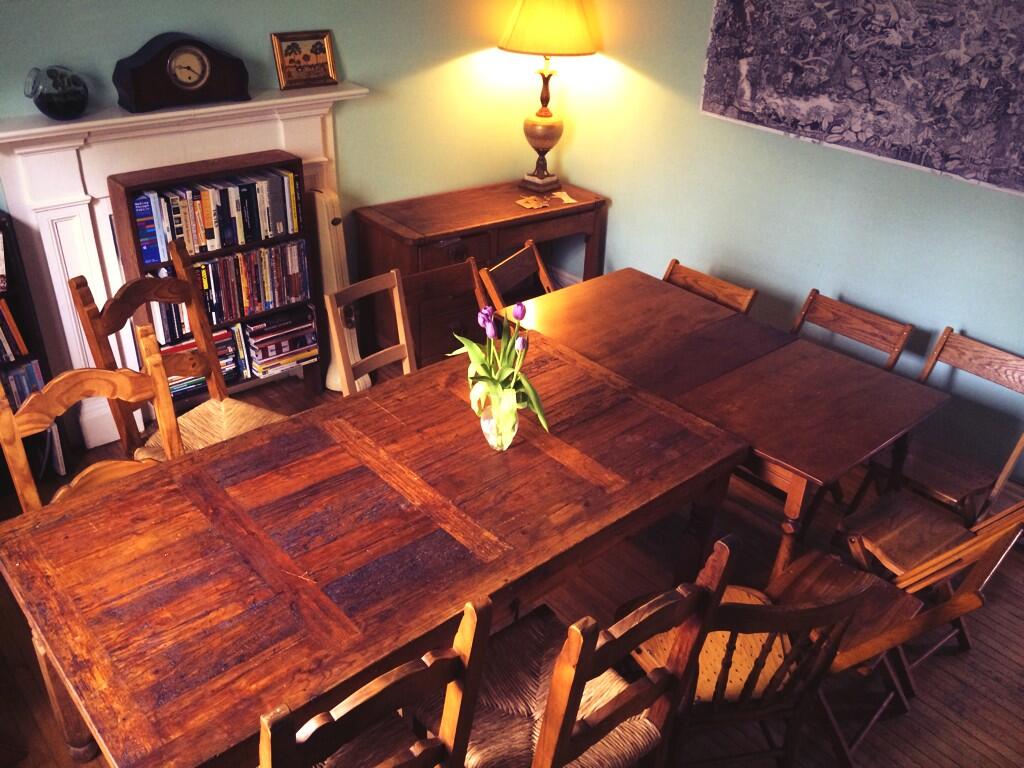 The potluck spread was impressive! We started the dinner portion of the evening and by the time I sat down at the table you could hardly hear yourself think: everyone was engrossed in conversations – pretty much like any dinner party you would be invited to! 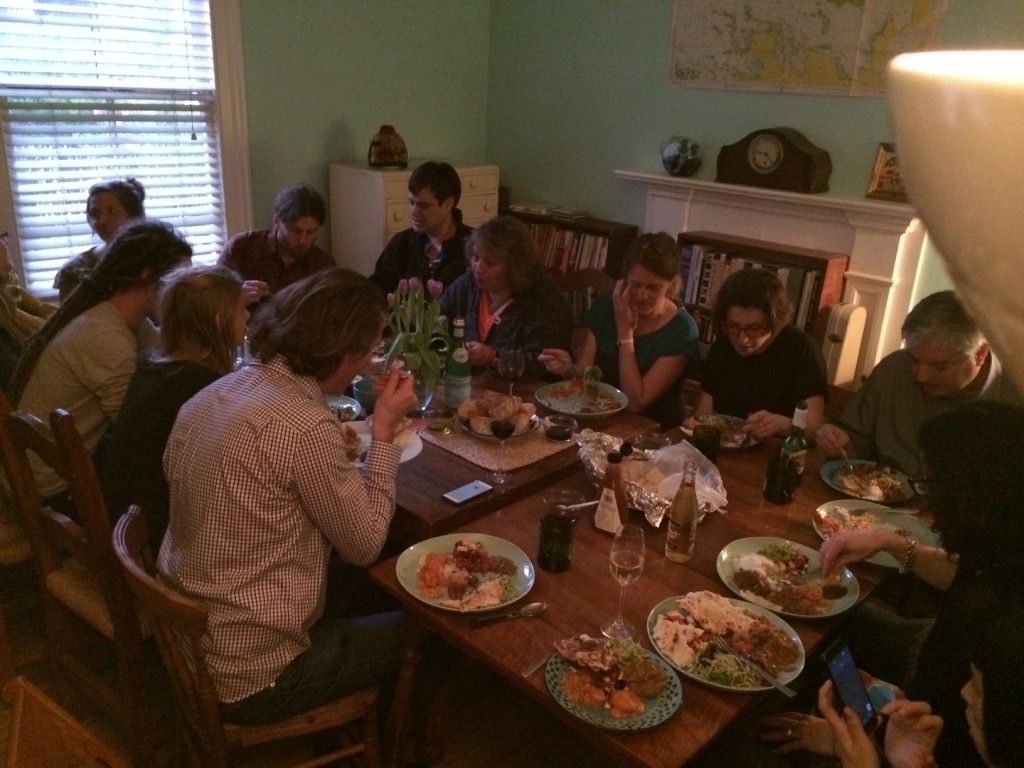 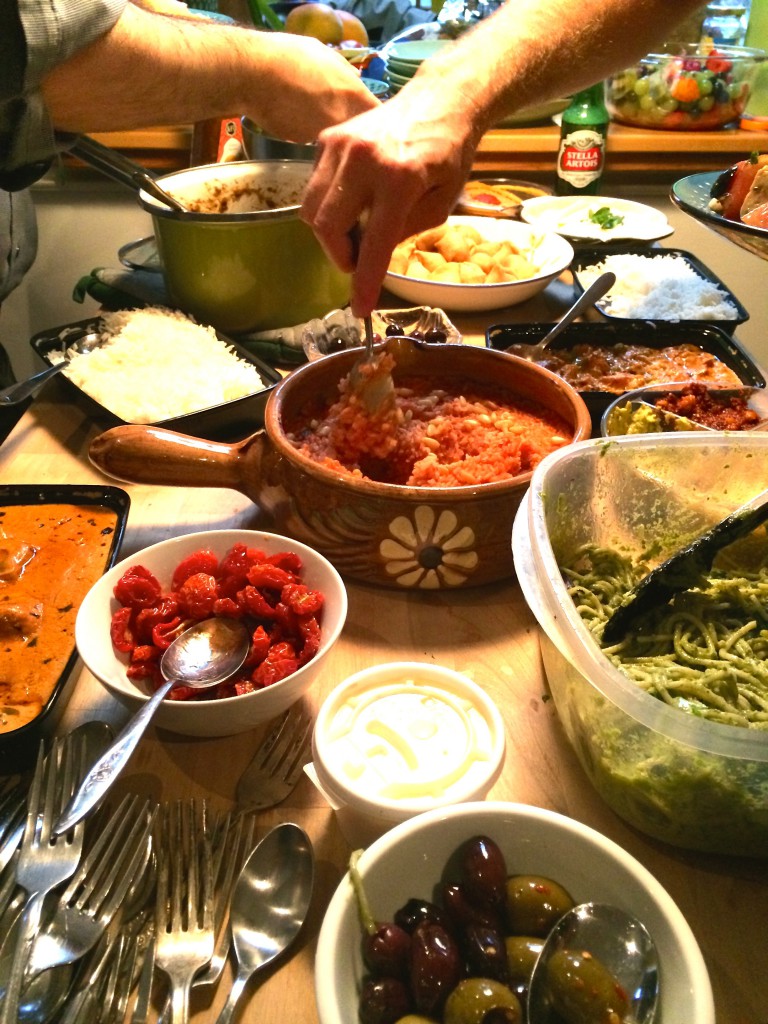 Stuart called everyone’s attention to the beginning of the story sharing part of the evening. Sharing a story required one to stand at the head of the table . Standing at the head of the table was a bit un-nerving for some participants but it was a good idea as it changed the dynamics of the room: suddenly you became the story teller and everyone around you the audience. It was interesting to hear the participants stories throughout the evening and see the room get transformed by the story teller one story at a time. The most amazing thing for me to watch and notice was how everyone paid attention to the story teller. The audience’s attention was focused on the storyteller and the story. Very similar to a stage performance – much more informal of course – with a dynamic of engagement with the audience: people nodding, approving, laughing but ultimately completely focused on the story teller.

Seeing the event unfold reminded me that events that seem to flow really well, be unformal and facilitate an intimacy, honesty and generosity that you rarely see are really orchestrated events. The Stone Soup evening was informal but Stuart and Ceda provided an invisible structure that made for an evening that everyone loved. Each of the rituals of the evening helped shape the evening’s experience: 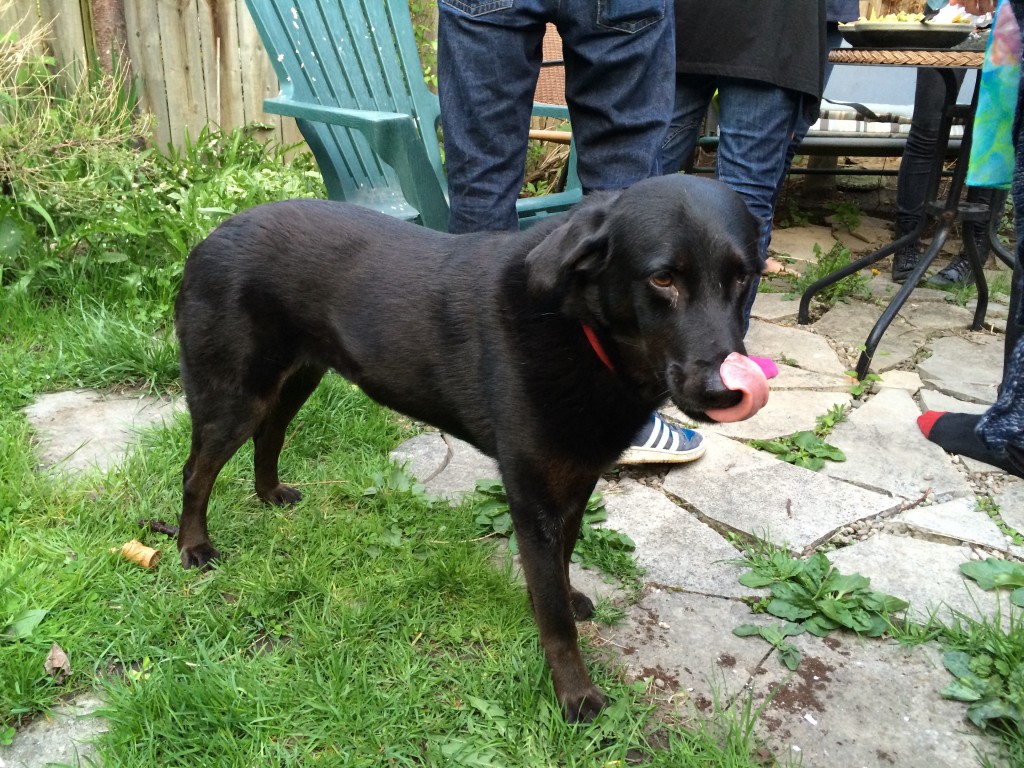 The evening’s storytellers came alive while telling their stories and the room shared their excitement. I am looking forward to the next installment as it was a bit of a magical evening where the currency exchanged was attention: undivided attention paid to the story teller. I think I have made new friends. Congrats Ceda and Stuart for bringing Stone Soup to Toronto.