Cappuccino Dacquoise from Dufflet in Toronto has arrived in the Ideeplex and that’s going to be my lunch today! Discs of hazelnut meringue layered with rich coffee buttercream, coffee whipped cream and bittersweet chocolate glaze; drizzled with white chocolate. Mon Dieu!
Ok, I will share! 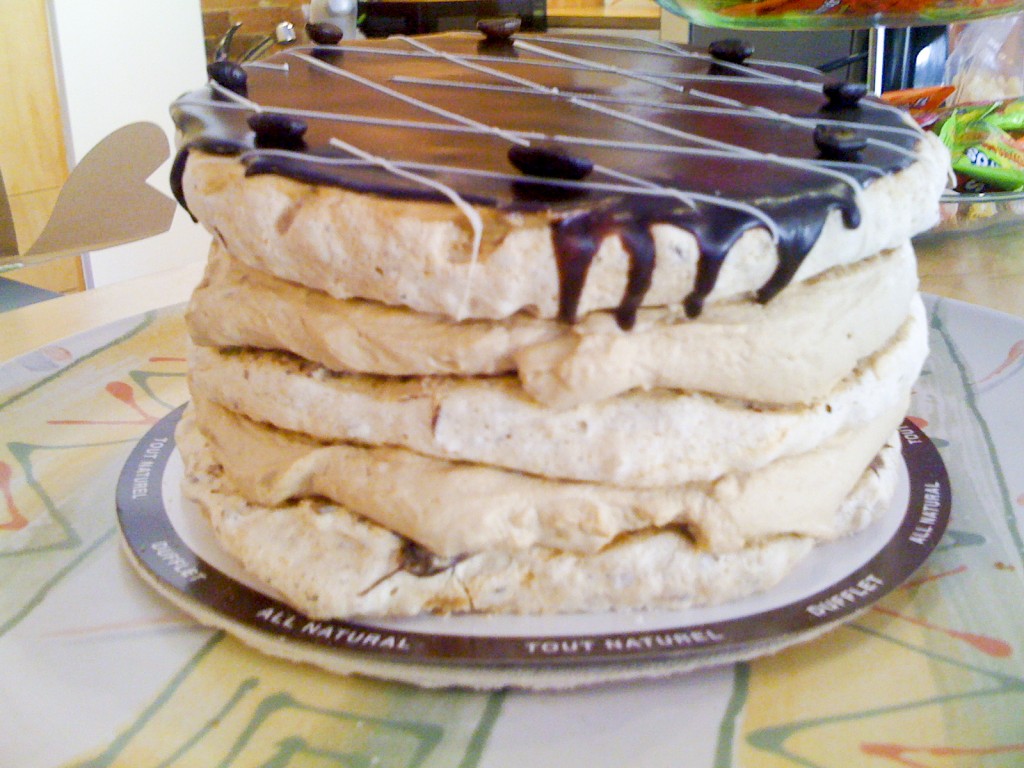 Many of you have asked us where the name “TinEye” originated. We’ll give you a quick hint: ROBOTS.

We at Idée love robots, machines, and all things mechanical. In fact, our office is filled with mechanical friends!

So a little history: back in 2000 when we were brainstorming cool names for our image recognition technology, it was no surprise that robots came to mind. Not just any robots, but those awesome tin toy robots of yore.

Yes, futuristic robots trump our human abilities in so many ways: their tin arms are stronger, their tin brains are faster, and their ‘tin eyes’ are keener…

Et voilà, the birth of TinEye! Well not really, as when we registered TinEye in the year 2000 – oh that has a nice ring to it – there was no TinEye, no reverse image search engine and no image recognition breakthroughs yet. There was a team, excited about changing image search.

We love our reverse image search engine name today but back then, had you been a participant in our brainstorming sessions you would have seen a polarized and totally divided team. Seriously who calls a search engine TinEye? Doesn’t the expression “tin ear” mean insensitive to music or subtleties in certain situations. If we called our reverse image search engine TinEye, wouldn’t we send the wrong message right out of the gate? And so did the conversations go… and go… and go… until we bit the bullet because we have a CTO who is obsessed with image search and when he becomes obsessed with a name, well it is game over for the rest of us!

TinEye’s “eyes” may be faster and keener than us mere mortals when it comes to finding image matches in billion image collections, but there are some things that human eyes can still do better! Like choosing the right colour palette to suit the mood of an image, or knowing just where to crop a photo to make it “pop”. TinEye on the other hand is laser focused on being the best reverse image search engine possible.

Fast forward to today: TinEye is the best reverse image search engine in the world (that’s what our fans tell us!) and TinEye has entered your search vocabulary in “hey, TinEye that image.”

For those of you wondering if we were inspired by Brandon Sanderson’s Mistborn trilogy: the story is awesome and the Tineyes in it are neat, but no, Mistborn was not even written when we picked our name. Bright minds think alike?

And there you have it, the etymology of our little robot TinEye!

Some shots from around the office…

Well it is about time that the Google folks mimicked the Canadian search giants – yes, that us! Google introduced colour search to image searching. Nice. Of course it will be awesome! Still no multicolour on Google but you can try a simple hack to get the poor man’s multicolour on Google: search for a colour using a keyword (for example blue sky) and pick a different colour from the drop down. Voila! No great image search results but hey it is a start… 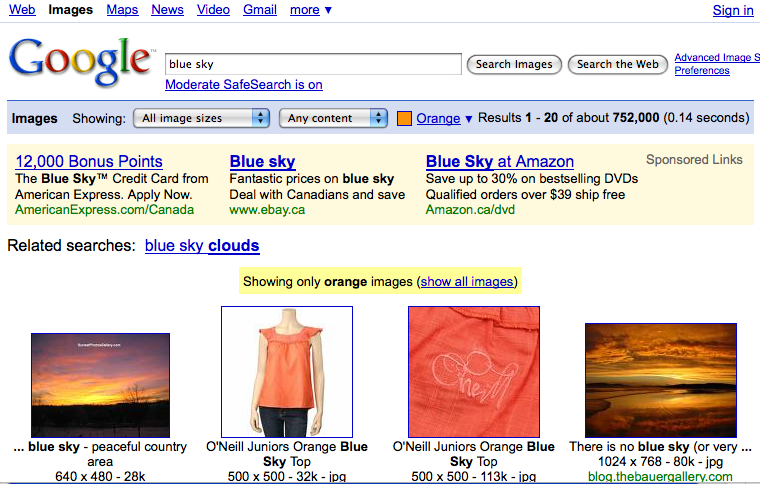 Now if you want the play with the real deal in multicolour searching head over to the Idée lab!

Love how a blog post on LifeHacker about Google’s colour search moves into a full discussion of Idée’s technologies namely: TinEye and Multicolor search. Fun times in the Ideeplex!

Well TinEye is a myth debunker! He is a fake photo buster. A couple of days ago the UK Telegraph reported that there was perhaps a giant snake lurking in the Borneo river but Mark Frauenfelder from BoingBoing smelled a doctored photograph:

Via BoingBoing: My unexpert analysis concludes that these photos of a 100-foot long river snake from Borneo are as phony as a politician’s smile.

Well yes, they are. Fromage who is a TinEye user pointed out that the photograph was a fake and that one of the original photograph could be found here. Here is a link to the entire TinEye result set.

When Kevin Kelly talks *you* listen. I am a huge Kevin Kelly fan so seeing our little reverse image search engine on his Cool Tool list made me sing all day. Ok not all day but you get the idea!

A few months ago I had a great conversation with Daniela who is a Brazilian journalist at the Folha De Sao Paulo. Daniela was writing about our Multicolr lab – this is one of the Idée labs where you can search 10 million creative commons images using multi colours. You can select up to 10 colors for your search (go play, if you have never tried it, and please don’t blame me for the amount of time you will be spending there today!). Anyhoo…I remembered the conversation last night because of Garrett‘s comment below:

It is easy to forget how important color is in our world – this may seem strange coming out of the mouth of someone who has been wearing black (exclusively) for the past 2 decades but… color unifies us. My conversation with Daniela was not so much about how color searching works but more about how color breaks down all language barriers, we all have favorite colors, we all see and look at color differently and one thing is for sure: words are very poor color descriptors! 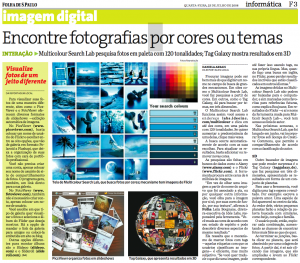 The Ideeplex is in crack alley – and we say that very fondly 🙂 This is the area around Queen and Sherbourne. But my my my… the area is getting all spify! I kid you not. Savoury grounds just opened up a coffee shop right at Queen and Parliament. Nice little joint, and I have the feeling it is going to become my meeting room outside the office. A walk away from the ideeplex and they are open at 7 AM and they have a great little space. Oh my. Looks like I am even going to re-start the CEO breakfast get together with other startup CEOs. Oh stay tuned. I love this neighbourhood. And not because of the new coffee shot: did you know that Britain street, the little street right behind the Ideeplex has a 3-5 stories building restriction? That means we are becoming an island surrounded by tall condos. Our own little island in downtown Toronto.

This is paradise. And you will find me here most early mornings! 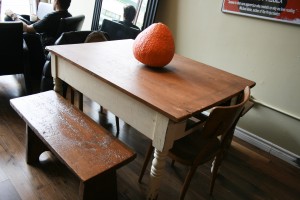 Oh yeah we all knew that: our multicolor search is not for the communist! Jason made my day! 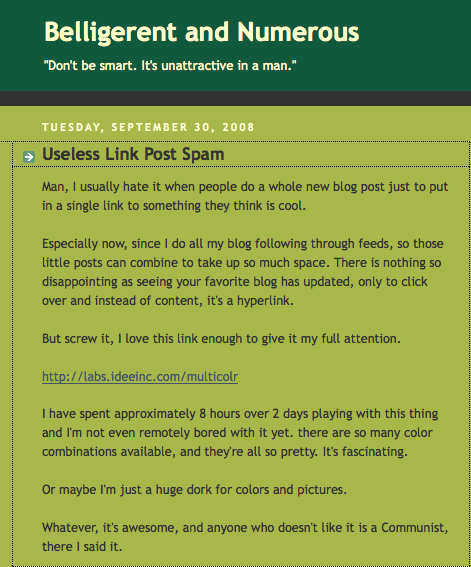 We have taken on the baking challenge this week: first up was my French toast, followed by Alice’s super fudge. I am wondering what tomorrow will bring us. This will make running an even more important activity this week! 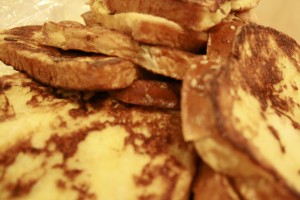 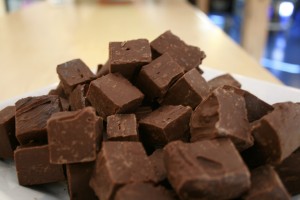 Yes! It is online and you too can play with it! You can now search 10 million Creative Commons Flickr images on the Idée lab using multicolour. Another first in the world for Idée. You will make fantastic discoveries, you will not be able to stop playing so please don’t read this at work as I don’t want to be responsible for all the time you will be "wasting" using this fantastic and creative search.

Look at what we found while playing with the multicolour search lab in the ideeplex:

Can you beat this?